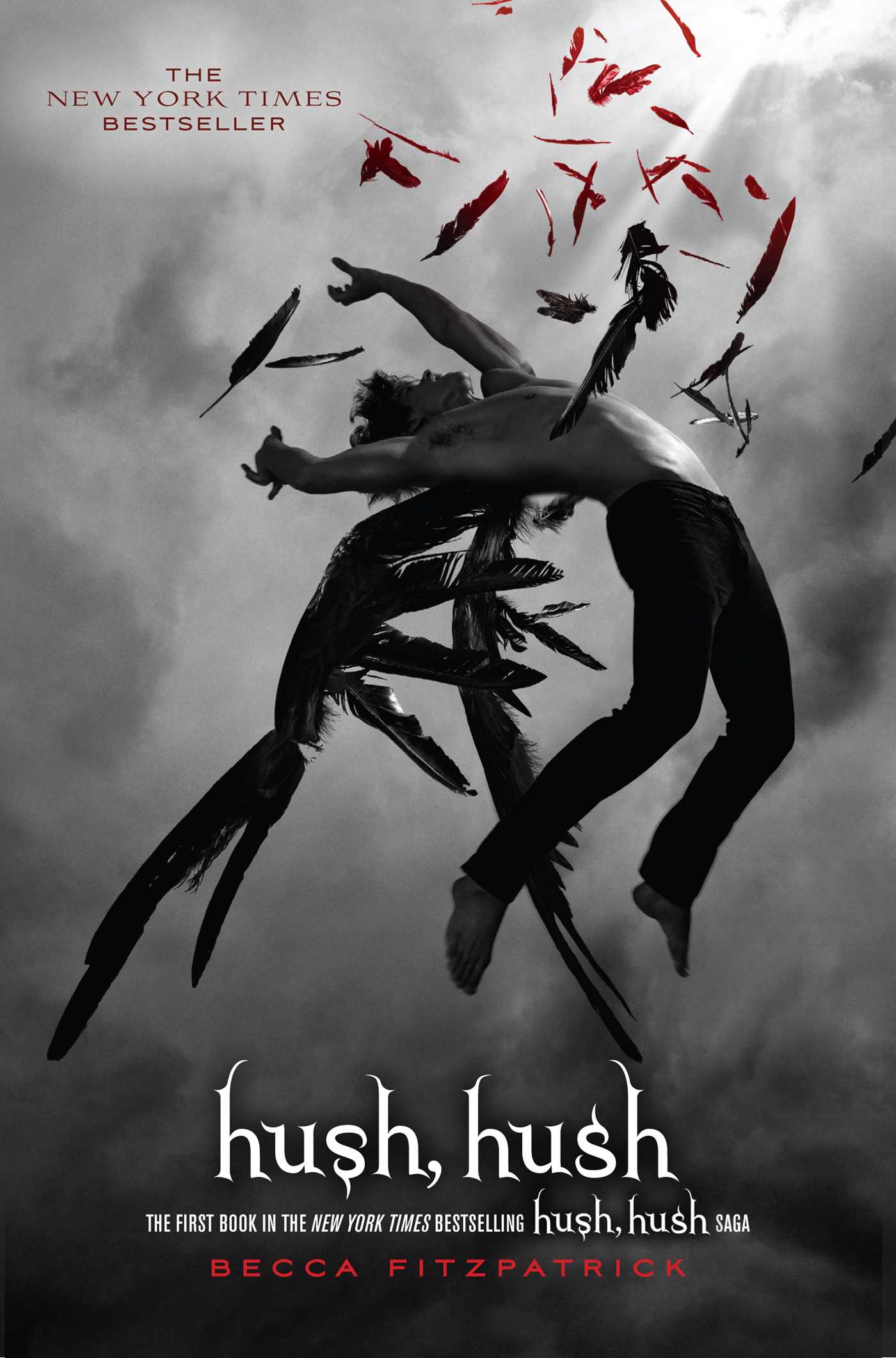 Hush Hush by Becca Fitzpatrick
Publisher: Simon & Schuster
Page count: 391
Release Date: October 2013
Series: Hush Hush series (1/4)
Rating:
Plot Summary: Nora Grey has never been particularly attracted to the boys at her school, no matter how hard her best friend, Vee, pushes them at her. Not until Patch comes along. With his easy smile and eyes that seem to see inside her, Patch draws Nora to him against her better judgment. But after a series of terrifying encounters, Nora's not sure whom to trust. Patch seems to be everywhere she is and seems to know more about her than her closest friends. She can't decide whether she should fall into his arms or run and hide.
Adapted from : GoodReads

Okay folks, strap yourselves in because I have a lot of feelings about this book. I read it in one sitting, which is only a good idea for this novel if you are ready for a rollercoaster of emotions. Which I was not. This book has torn me up inside because I have two very strong and conflicting feelings about it. To better understand where this conflict comes from, I should probably explain a couple things…

I read this book 4 days ago and after I finished it, I sat in my chair, like this, for a good 10 minutes:

I then rushed off to write up my review, rating the book a 4.5. I decided to wait a little before putting this post up and have now come back to it. Having taken time to better digest everything, I can admit that there are some issues, and I’ve edited my review to discuss them.

Ultimately though, after lots of reflection time, I’ve decided that I really, really enjoyed the book. Despite some flaws, I still put the book down feeling amazingly happy, and isn’t that the entire point? Either way, I would strongly encourage any YA fans to read it and make up your own mind.

Without further ado, my review!

Angels, Angst, and Arrogance, oh my!

Reading this book was what I imagine taking ecstasy must be like. Allow me to set up the story for you: Meet Nora, a plain teenage girl living in a small town. Self-sufficient, Nora is a good student who has never fallen for anyone. Enter Patch, the mysterious new transfer who Nora is partnered up with in her Biology class (not just biology, but a biology class dedicated to human attraction and reproduction. Sex people. We’re talking sex.)

Now I know what you might be thinking. Olivia, are you reviewing Twilight? And that is exactly why this book lost half a star. When I first started reading, all I could think of was Twilight. Except instead of being broody and angsty like his Cullen counterpart, Patch gives no fucks about anything and comes across as cool, confident and frankly, pretty arrogant. Further, instead of push her away, Patch actively pursues Nora from the get go.

I don’t want to give away too much pertaining to the plot itself, because I want anyone reading this book to experience it fresh the first time they read it, but what I will say is that the action starts up very quickly, and there aren’t a lot of stagnant moments. The end action sequence in particular had my mind going a mile a minute and I was physically exhausted after reading it. I just kept asking wtf was going on, and I had to force myself to read slower because I was missing details. Hush Hush also has a lot of are REALLY stomach twistingly awkward and/or amazing moments (SPOILER: For instance, when Nora goes to interrogate Patch’s coworkers in disguise and finds out he’s working on his night off. The entire scene is perfection. The sexual tension in this book is pretty intense. I kind of hate myself a little for even saying that, but hey, someone has to say it.

This section could go forever if I let it, so I will try to be brief. As stated above, the two main characters of this novel are Nora and Patch. Nora, for all her “innocence” and Bella like behaviour, delivers a couple really great one liners and quips. She does make some questionable decisions, but she is only 16, so I mean, I can’t really fault her for that. I made some pretty terrible judgement calls at 16 (she said, as if she were a wise soul. Don’t let me fool you folks, I am really not that wise! Or that old…)

Patch, who started off way too Edward Cullen for my taste, redeemed himself as the book progressed (SPOILER: the scene with the 200$ jumps to mind: “are you rich?” “No, I won that money the other night. The bank is closed.” LAWL.) Unlike Edward who is a rich pretty boy who follows the rules, Patch is very rough around the edges. Most of what he has, he wins playing pool and the rest he gets from busing tables. He’s not afraid to tell it like it is and is definitely not a prude like Edward. Some people have said that he is abusive toward Nora, but I don’t really read it that way. He can be an ass, but I don’t think it’s malicious or abusive (SPOILER: Well, other than when he wanted to kill her I suppose… But that didn’t last long and there was a valid reason for it. Not valid enough for me to forgive him had he done it, but you know. Valid for him I guess. Another Twilight link?)

One character who I really, really did not enjoy however, was Nora’s best friend, Vee. She is supposed to be the comedic relief but her jokes fall flat every. single. time. She, like Nora, has poor decision making skills and can come off as quite obnoxious at times.

All in all, I really enjoyed this book and it definitely gave me that readers high that any fandom appreciating reader strives for. Had it been less Twilight-ey, it would have scored even higher, but hey, nothing’s perfect.

Have you read this series? Do you agree with my rating? Share your thoughts below! =]