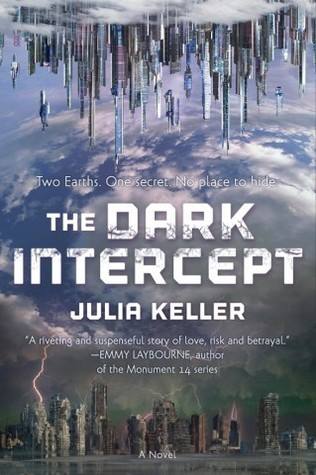 The Dark Intercept by Julia Keller
Publisher: Tor Teen
Page count: 314
Release Date: 31 October 2017
Series: true
Rating:
Plot Summary: In a radiant world of endless summer, the Intercept keeps the peace. Violet Crowley, the sixteen-year-old daughter of New Earth’s Founding Father, has spent her life in comfort and safety. Her days are easy thanks to the Intercept, a crime-prevention device that monitors and provokes emotion. But when her long-time crush, Danny Mayhew, gets into a dangerous altercation on Old Earth, Violet launches a secret investigation to find out what he's hiding. An investigation that will lead her to question everything she's ever known about Danny, her father, and the power of the Intercept.
Adapted from: GoodReads

A gripping read; The Dark Intercept is a light science fiction novel, with elements of mystery, romance, and action. A great book if you want to devour a book in one sitting, or if you need a quick pallet cleanser between heavier reads.

Ever wonder what the future holds? What happens when the population overwhelms the planet and people’s greed takes over? Julia Keller imagines an interesting solution, but of course no paradise is without its flaws. The Intercept is a program to help law enforcement keep people in line, using individuals’ emotions as weapons against them when necessary. But Violet sometimes feels that emotions should not be exploited in that way, as do the Rebels of Light, though they have very different ways of expressing their thoughts on this matter. 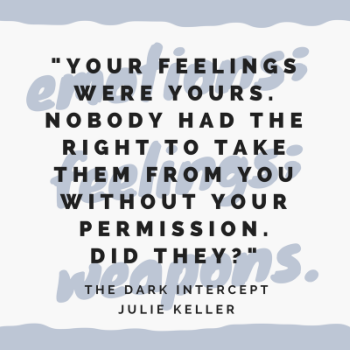 This novel, divided into 3 parts, is a nice sci-fi action novel that delivers more plot twists than expected, but does so in a very natural and clever way. The pacing is a little slow at the beginning, but it really picks up in parts 2 and 3 – hang in there! (Seriously, my thoughts from the last third of the book consisted mainly of “Whoa!”, “What?!” and “Wow”!)

While the characters are not particularly complex or unique, they all fulfill their roles perfectly and fit together harmoniously. The novel also poses some interesting musings on the power of feelings, both good and bad ones – turns out good feelings can be painful too; figure that one out… or read the book and Keller will spell it out for you! ;)

Keller seems to have aptly followed the standard recipe for a light sci-fi novel. Her concept is interesting; an ideal world where your emotions are used to control you, and on top of that two Earths, one basically unlivable and the other perfectly manicured. Keller also does an amazing job throughout the Dark Intercept of vividly portraying the two worlds – through visual, olfactory and emotive domains – and the extreme differences between them.

So, why only 3.5 stars? Well, first while I enjoyed this novel, Olivia also tried to read it and gave up, TWICE! I guess it’s not for everyone. Also, the choice to make Violet the daughter of the president of New Earth felt sort of wasted, she cashed in on it once and then was dragged into a mess at the end because of her father, but other than that she didn’t feel like the daughter of the most important guy in the world… Furthermore, SPOILER: the ending didn’t really sit well with me. For all the intrigue that the novel builds, everything seemed to be resolved a little too easily. The Dark Intercept is apparently part of a series, but really I can’t imagine what is left to address, the novel pretty much wraps everything up. The little bit of cliffhanger feels more like a sentimental add on than an actual TBC…

The novel was good as a standalone, I’m not going to seek out any follow-ups; while I have some qualms about the ending, I feel that now that it’s written as such there isn’t anything more to say. Have you ever read a book that was part of a series that you feel works better as a standalone??