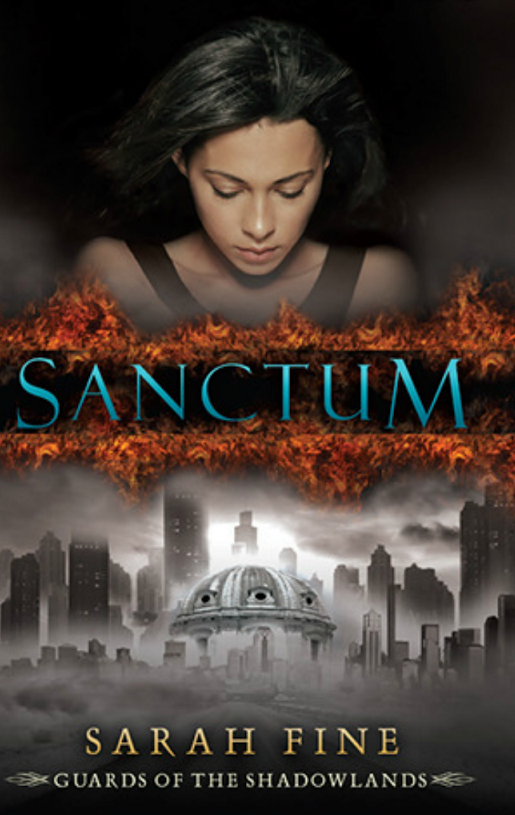 Sanctum by Sarah Fine
Publisher: Skyscape
Page count: 417
Release Date: October 2012
Series: Guards of the Shadowland (1/3)
Rating:
Plot Summary: A week ago, seventeen-year-old Lela Santos’s best friend, Nadia, killed herself. Today, thanks to a farewell ritual gone awry, Lela is standing in paradise, looking upon a vast gated city in the distance—hell. No one willingly walks through the Suicide Gates, into a place smothered in darkness and infested with depraved creatures. But Lela isn’t just anyone—she’s determined to save her best friend’s soul, even if it means sacrificing her eternal afterlife.
Adapted from : GoodReads

I am a city girl, through and through. Consequentially, I love it when an author can turn a city into a character in its own right. In Sanctum, Sarah Fine does not disappoint and her version of hell; the dark, gritty underworld city is just the right amount scary and cold, with buildings that breath and grow around their residents.

It doesn’t hurt that there are basically ninjas guards zipping around said city.

The idea is interesting, because it explores a very big question that we as humans have: what happens to me after I die? Further, this book touches on a subject that a lot of people don’t know how to broach: that of suicide. Every single character that we meet in the city (other than the non-human guards) are there because they successfully completed suicide. Even Lela, who goes by choice, had once tried to take her own life and ended up there for a short while before being resuscitated. Through this topic, the book also explores depression and mental health issues. More than ever, these topics are being brought into the public sphere, and Sanctum does a wonderful job of furthering this discussion.

Now, after the first two chapters (which outline Nadia and Lela’s friendship), I definitely thought there was going to be a romantic relationship between the two of them. I couldn’t shake the feeling, and I was so excited because if there is one thing I love seeing in YA, it’s diverse representation. The love between these two characters was very intense, but in the end, it was purely friendship and Lela ended up having a male love interest. Now, I don’t knock the book for it, because it was still a good story, but I definitely think there was a bit of a missed opportunity there.

That being said, the relationship between Lela and Malachi (the male protagonist) is thoroughly entertaining and I enjoyed watching that unfold. The only moment that didn’t really fit was the following:

He looked up at me, dark brown eyes shining. “You’re so beautiful,” he slurred, making me sure his lips were growing numb and his brain wasn’t far behind. Figures. The first time a guy tells me I’m beautiful, I’m in hell and he’s delirious. “Please give me directions. I’m going to feel pretty awful if you die.” “Say my name.” I rolled my eyes to fend off all the possible meanings in that simple request. “You’re not making any sense.” He moaned as his chest shook with bemused laughter. “Have mercy and give me my dying wish. I want to hear you say it, just once. Please say my name, Lela.” (Fine, 96)

This scene was a little too much a little too quickly and though it set the tone for their relationship to follow and though you could argue that Malachi was delirious, it still felt forced. The rest of the scenes seemed better paced.

The one character that I really liked though, was Ana. She was tough, kicked a lot of ass, made no excuses, and had a tendency to tell it like it was. Her backstory is a little tragic, but then again, so is her fate. She had to die, I get that, but it was still unfortunate. I hope that she didn’t end back up in Suicide City, memory gone.

Overall, I liked this story and will definitely continue with this series at some point in the future. I’ve learned after the whole Wondrous Strange debacle that I should take some time between reading books and their sequels, lest I grow bored with it all and not enjoy it. So for now, I’m saying goodbye to Lela and Malachi, but I’ll definitely be back.

What about you? Have you read the story? Do you agree with my grade? Let me know in the comments below.