Ripper by Amy Carol Reeves
Publisher: Flux
Page count: 343
Release Date: 2012
Series: Ripper (Book 1/3)
Rating:
Plot Summary: It’s 1888, and after her mother’s sudden death, Abbie is sent to live with her grandmother in a posh London neighbourhood. When she begins volunteering at Whitechapel Hospital, Abbie finds she has a passion for helping the abused and sickly women there. But within days, patients begin turning up murdered at the hands of Jack the Ripper. As more women are murdered, Abbie realizes that she and the Ripper share a strange connection: she has visions showing the Ripper luring his future victims to their deaths—moments before he turns his knife upon them...
Adapted from: GoodReads

I was completely captivated by this book! I became immersed in it whenever I read it, not in an anxious way, I wasn’t chomping at the bit to know what happened next, but it was just incredibly enjoyable, a real pleasure to read! (The book has 350ish pages, but it felt more like 150!) 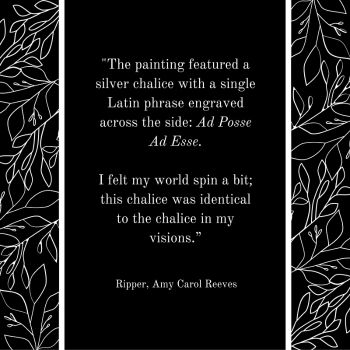 Style-wise, Reeves perfectly captured the gothic way of writing (not surprising I suppose when you consider that she is has a PhD in 19th century British literature!), slightly literary descriptions, an intriguing storyline, a Victorian backdrop that constantly mixes the realities of high and low society. Usually my qualm with gothic novels is that they start too slow and are hard to get into, but Ripper had great flow, I enjoyed keeping track of Abbie’s happenings and wonderings. True to it’s genre, the story which was interesting all along did maximally pick-up in the last 50 pages or so, suddenly revealing an abundance of information and spiraling darkly downward in an unexpected, but somehow perfectly fitting way. The division of the novel into four parts clearly delineates the novels’ decent into the world of the paranormal and strange – a good structural choice.

With a fairly high number of characters in this book, Reeves artfully allocated just enough character development to each in coordination with their presence within the story. Abbie is such a strong, character and she knows herself well. Stubborn and self-aware; she is smart, plucky and passionate, a perfect gothic heroine. The tie-in with the Rossetti family is also pretty cool!

The principal setting, Whitechapel hospital, a teaching hospital in the East End of London is ideal in many ways: the location’s controversial location and patients, and the eccentric medical students (mostly males, so obviously well-devised for potential romances! ;) ), doctors and staff. Plus, Reeves descriptions of medical procedures, routines and problems are lightly gory in a real way that brings the locale to life.

What I liked about this story was the pacing; it has a great build up and a captivating finale. As stated above, the writing was perfectly on point, combining the best of a gothic style with a consistently appealing developing storyline. I liked Reeves’ approach to the Jack the Ripper element of the tale, she used it more as a narrative thread in my opinion, slowly making it more and more relevant.

The paranormal element of the book felt a bit forced at times, a bit too transparent or out of place in contrast with the very real-feeling narration, almost even tacked-on as an after thought. While it does play an important role in the story I felt it could have been better integrated. Typically gothic novels reveal at the end a completely mundane rational for the mysteries of the novel, the paranormal element allows this novel to skirt this responsibility, which felt unsatisfying since the paranormal piece was also not well explained – though I strongly suspect the subsequent books in the series will tackle this issue.

The curious portrayal of Christina Rossetti in the novel prompted me to want to know more about the famous Victorian poet. I did a bit of research on her after reading and turns out she is quite a talented poet! Known to be quote tempestuous in her youth, she matured into a more self-controlled woman, a life-long writer (from age 11 onward), Poetry Foundation has this to say about her: Christina Rossetti has often been called the greatest Victorian woman poet, but her poetry is increasingly being recognized as among the most beautiful and innovative of the period by either sex.

To read some of her poems paired with pretty illustrations like the one below, check out the Internet Archives 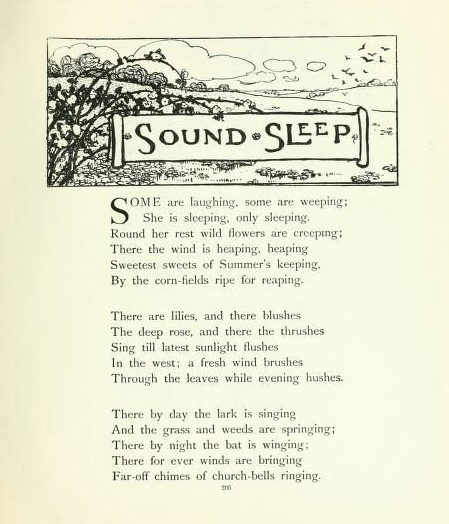