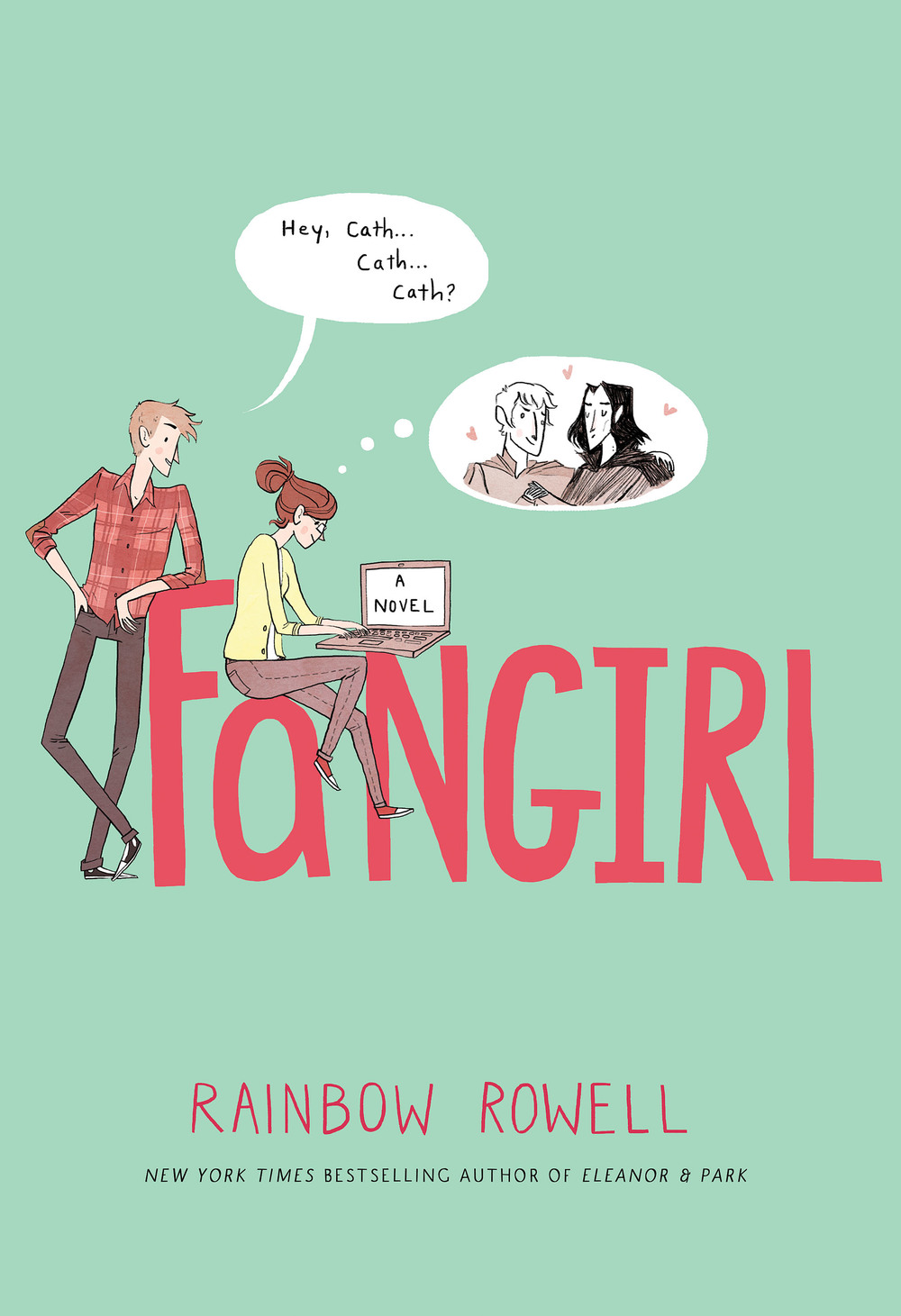 Fangirl by Rainbow Rowell
Publisher: St. Martin's Press
Page count: 445
Release Date: September 2013
Rating:
Plot Summary: For Cath, being a fan is her life—and she’s really good at it. She and her twin sister, Wren, ensconced themselves in the Simon Snow series when they were just kids. Reading. Rereading. Hanging out in Simon Snow forums, writing Simon Snow fan fiction, dressing up like the characters for every movie premiere. Now that they’re going to college, Wren has told Cath she doesn’t want to be roommates. Can she make it without Wren holding her hand? Is she ready to start living her own life? Writing her own stories? And does she even want to move on if it means leaving Simon Snow behind?
Adapted from : GoodReads

I am a fangirl.

When I was 11 years old, I discovered the Harry Potter discussion boards and it was all downhill from there. Fanfiction, RP*, making graphics for my favourite OTPs: I was hooked and I was hooked hard. The list of fandoms that I was into only grew as my friend list did, mostly because we would constantly be sending each other recs. So when I found out that this book existed, I knew that I had to read it.

Simply put, I loved this book. I am usually not reeeeally a huge fan of every day fiction (preferring fantasy, science fiction, etc.), so I didn’t expect myself to love this one. I knew I’d enjoy it, certainly, but I didn’t think I’d love it to the point that I did.

*For those who don’t know, RP stands for Role Play. In this context, it is when 2 or more people write scenes together online. Each writer is responsible for at least 1 character, and the idea is that the scene is built together, but you never truly know where the writing session will take you. Writers will often plot the general outline of where it’s going, but everything in between is in the moment and spontaneous. Though I personally find that RP isn’t as popular as it once was, you can still find groups on the internet. Tumblr still has a decently large community for it. Surprisingly, so does Twitter.

What makes this book so good?

I’m glad you asked. I think what made this book so great is simply how relatable it is. The fandom in the story (Simon Snow) is basically Harry Potter (though Harry Potter is mentioned in the book at one point, there is no fooling us. Simon is Harry, and Baz is Draco), so already there is a very easy entry point for people who are part of that fandom. It also introduces the world of Fan Fiction (FF) (I talk about this in my ramble here, should you be so inclined to check that out).

Fan Fiction is something that has become much more mainstream in the last couple years, and this book truly highlights this. The fact that Rainbow Rowell could write this book and get it published shows a lot about how society is willing to embrace Fan Fiction, and not only behind closed doors. I remember when I was younger, in the early days of my getting into Fan Fiction, no one spoke about FF outside of their Fandom friends. For most people, it was a dark secret that you kept to yourself, for fear of being judged or ridiculed. Speaking to my friends from back then, they all say that they experienced the same feelings on it.

Nowadays, it’s almost weird if you don’t know what Fan Fiction is, and many people not only openly read it, but also write it. I’m not saying that the stigma surrounding it is totally gone, but it certainly is better than it used to be.

The characters in this book are anxious, delightful, unstable, kind, out of control, unusual, hilarious, shallow, and everything else on the spectrum of human characteristics. This also means that there is likely to be a character that every reader will identify with or appreciate. For me, that was Levi. Though his grammar is terrible, and he makes horrible jokes, his lightheartedness is infectious. Cath, the main character of the story, is also pretty great and is flawed in all the right ways. She really makes you feel like you can get your shit together.

“If you loved the book so much, why did you only give it a 4?” What a good question Olivia’s sub conscience! This book lost the star for a couple reasons, but the main one was the ending. I closed the book 100% unsatisfied with the ending that I got. Perhaps even more so because I was reading an ebook, so I couldn’t tell how far I was from the end until I got there. The first thing I did when I finished it (ironically enough) was to go see what Fan Fiction had been written about the book (I found this really great 5-years-later type story) because I wasn’t read to let it end.

I proceeded to forgive Rainbow Rowell for this abrupt ending when I found out that SHE WROTE A SIMON SNOW NOVEL.

So naturally, I jumped on that and read it as quickly as I could. I don’t think there will be a review of that book on here, but it was a good way to keep the Fan Girl feeling going after I finished this story.

Overall, I enjoyed the novel and though I wouldn’t put it on my list of the most perfect books ever, it does sit closer to the top than the middle. Definitely worth your time and money this summer. Especially if you identify with any of the things mentioned above (also, if that’s the case, message me. I love fangirling about things with people. Doooo it.)

What about you? Have you read Fan Girl? Did you like it? Hate it? Sound off in the comments below!