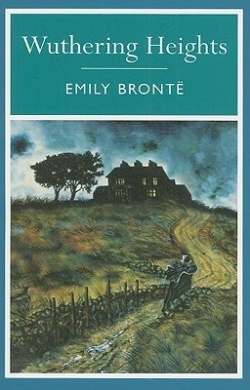 Wuthering Heights by Emily Brontë
Publisher: Arcturus Publishing Limited
Page count: 272
Release Date: 2009
Rating:
Plot Summary: Wuthering Heights is a wild, passionate story of the intense and almost demonic love between Catherine Earnshaw and Heathcliff, a foundling adopted by Catherine's father. After Mr Earnshaw's death, Heathcliff is bullied and humiliated by Catherine's brother; he leaves Wuthering Heights, only to return years later as a wealthy and polished man and to exact a terrible revenge for his former miseries.
Adapted from : GoodReads

Declarations and accusations, desires and sacrifices, love and hate; Wuthering Heights is a tale of very real and intense human emotions. Nelly’s account of the story of the residence and its tenants is oddly captivating but the story itself is somewhat difficult to accept. Wuthering Heights was an interesting literary experience, recommended for literature aficionados and masochists…you sort of have to be to take on this beast of a novel!

The story is simultaneously profound and mundane; it recounts the intertwined lives of two families, The Earnshaws (including the “acquired” Heathcliff) and the Lintons. These strong characters artfully play their roles such that there is a sense of something deeper always lingering below the narrative. There is flow in the story that, though it recounts a large period of time, beautifully balances details and leaps in time. 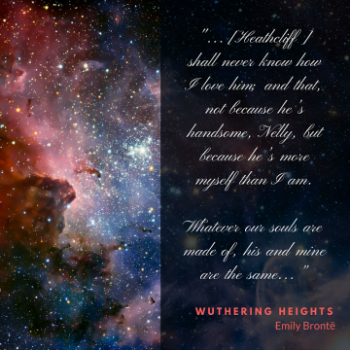 The narration of this tale is primarily transmitted by Ellen Dean (Nelly) who outlines for Mr. Lockwood the history of the neighbouring kinfolks, one of whom, Heathcliff, if Mr. Lockwood’s landlord. Nelly’s narrative voice is perfect, as a worker she is observant, as Catherine’s confidant she is privy to secrets, and as she is bold and action-oriented, her own role within the tale, as well as her account of other players’ parts is spot on.

Wuthering Heights is irrefutably a gothic drama; the majority of the characters are brooding yet sensitive (some secretly and some overtly). The story has relatively few characters, and each one is satisfactorily developed – even so, I got a bit confused at first, I would probably recommend making yourself a Wuthering Heights “family tree”, or look one up online, but be warned, it will reveal spoilers!

While the characters are well constructed, be warned, many of them are, rather unpleasant folk with more vices than virtues, or at least with a tendency not to hide their faults. Brontë creates very real-feeling characters apt to cause readers to feel annoyance!

The one “let-down”, so to speak, was the ghostly element that was present at the beginning and the end of the novel, but never really explored or explained adequately.

This classic piece of 19th century gothic British literature is iconic and I’m mostly glad I read it. I have very mixed feelings about this book, partly due to my own expectations. I thought I was going to read a dark love story. Having read the novel I can state that it started as a love story with cold Heathcliff letting his guard down around charming Cathy, then became a very intense love story between proud and infatuated lovers, then turned into a dark revenge tale SPOILER: with Heathcliff slowly taking everything away from Edgar because he is the reason Heathcliff could not have Cathy –and I mean everything, his money, his house and land, his nephew, his daughter, his happiness and his health!- and ended again as a love story between two different characters than the initial two. Complicated. In short, I’m not sure what to call this book theme-wise, but I can assure you, it is, as I stated above, a tale of very real and intense human emotions.

I love how Brontë portrayed 19th century British society (even in the more removed location), in which there is much baiting and taunting and tempting, but in the end every person adheres to what is expected of them by society and is acutely aware of what they can and cannot get away with.

The plot was very unexpected at times, but then other times it was incredibly transparent. SPOILERS: I was caught completely off guard when Catherine turned out to be pregnant, but could predict that Cathy and Hareton would end up together from their first meeting - that chemistry was undeniable!

While I know Heathcliff is a central character I never warmed to him, not surprising considering he’s kind of terrifying. Violent, vengeful bitter, rude, proud and entitled; SPOLER: I kept waiting for his moment of redemption, but it never came! Catherine also had her unlikeable moments, but she also possessed charm and wit, which in my mind helped her character feel better rounded.

Wuthering Heights cast a spell over me, when I was reading I was completely engrossed, but the second I closed the book and walked away I was doomed, because the next time I opened it I could never remember where I had last left off. Truly a strange phenomena, perhaps due to the large time-span of the tale and the slightly skewed chronology (because of Nelly’s narrative choices and side comments), but overall it was a bit disorienting.

I’m torn about this book, it definitely had strengths and weaknesses, but there’s something special to it. I would not recommend everyone read it, but I can say those who do endeavor to read it are in for an experience!

I get the sense that a lot can be learned from Wuthering Heights, but I’m going to put the focus on little life lessons I learnt from/observed based on Heathcliff.

i) Revenge is useless!

SPOILER: Heathcliff goes through all that trouble of destroying Edgar Linton, and in doing so makes everyone affiliated with Edgar also miserable, but does he actually get what he wants? No, because he wants to have been the one to marry Cathy and that’s impossible. His whole modus operandi reminded me a bit of that saying by Buddha: “Holding on to anger is like grasping a hot coal with the intent of throwing it at someone else; you are the one who gets burned.”

If you liked this comic, check out more literary illustrations by Kate Beaten here

ii) Poisonous people taint those around them.

SPOILER: Heathcliff is such a poisonous character, he is rude and spiteful as a child and seems to cultivate those traits within himself to become a vile adult. But his horribleness is so great that it spills over from him and affects those around him. It’s incredible how things change when he is no longer in the picture! Reminds me of the concept of surrounding yourself with people who evoke in you the type of person you want to be.

This is a life philosophy of mine, but I think it applies very nicely to this book. Heathcliff is pretty much all bad, while Catherine is bad at times but quite good at others. We all have flaws, but we all have stellar qualities too, and it’s important to be aware of and flex both. It makes us human to have both; Heathcliff, being so one-sided in his personality is more monstrous than human; he’s difficult to relate to. (Maybe that’s why I don’t like him, I don’t find him believable, or don’t want to believe people like him exist…)