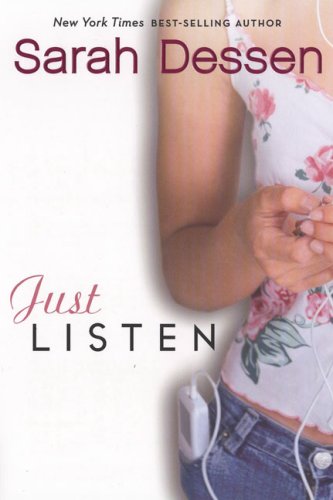 Just Listen by Sarah Dessen
Publisher: Viking, Penguin Group
Page count: 371
Release Date: 2006
Rating:
Plot Summary: Last year, Annabel was the girl who has everything, at least that's the part she played in the television commercial for Kopf's Department Store. This year, she's the girl who has nothing. No best friend because mean-but-exciting Sophie dropped her, no peace at home since her older sister became anorexic, and no one to sit with at lunch. Until she meets Owen Armstrong. Tall, dark, and music-obsessed, Owen is a reformed bad boy with a commitment to truth-telling. With Owen's help, maybe Annabel can face what happened the night she and Sophie stopped being friends.
Adapted from: GoodReads

What seems like a light read quickly reveals that there is more going on with our narrator, Annabel Greene, than she herself is willing to admit. Nevertheless, Sarah Dessen masterfully balances the light and heavy passages in her book, resulting in a quick read that also makes a lasting impact.

The opening quote by Robert Frost which claims: The best way around it through, summarizes the overall message of the book from the start, making the reader both receptive to and aware of the slow journey Annabel ventures on throughout the novel.

While some of the plot was utterly predictable, SPOILER: Annabel and loner Owen become friends and then more, as he helps her see the good qualities within herself that she is blind to, Clarke makes her way back into Annabel’s life, the emotion Dessen weaves into her narrative made up for this. The writing style is simple, but very honest; and includes a couple very nicely worded observations that are sure to resonate beyond the confines of the book and into the life of the reader. Annabel’s stream of consciousness felt very genuine and with a character as open and honest as Owen, this book granted readers an authentic glimpse into not one, but two people’s lives.

I also found it, at first shocked, but then very fitting that SPOILER: another character, Emily, had a similar experience to Annabel’s, and that it was her and not Annabel who came forth and pressed charges against Will. I think the choice to have someone else take the initiative in this instance delivered a powerful message; that contributing to and strengthening a project started by someone else can be just as valuable and empowering as initiating it.

Dessen’s use of flashbacks throughout the novel felt like a natural way to explain Annabel’s situation and appropriately mirrored Annabel’s own inability to escape flashbacks.

I quite enjoyed reading this book; while some of the themes got a bit heavy, the writing style was breezy and pleasant to read. I also really liked how the significance of the title appeared in the story. SPOILER: Though I’m still wondering if the CD was supposed to be blank, or if not, what did Owen think he had put on it?

One of the things I like most about the novel was the way Dessen made the book about Annabel’s life, but she highlighted the struggles of those around her too, because they affected Annabel as well. I thought it was great to see Annabel’s very justified concern for her mother and her sisters and how that in turn had an effect on her own struggle, mostly negatively, until she managed to change her perspective. I was especially touched by the poetry reading scene and by some of the reflections by Annabel about family dynamics and support. Full disclosure, I (just barely) held back tears a couple times while reading this book.

I also thought that Dessen did a good job of capturing some of the internal conflict involved with SPOILER: a victim of sexual assault revealing their story. The support she got when she did disclose the details of the incident was heart-warming. Furthermore, I personally see some subconscious effects of this incident influencing Annabel’s sudden disinterest in modeling (and being watched, dressed, made-up and scrutinized).

I did feel a bit cheated by the ending, I see what Dessen was doing, SPOILER: it was supposed to be cute to have Annabel and Owen recite an earlier conversation with their roles reversed, but I felt that it was just a bit too cheesy, I would have liked an ending with more originality, and by that I mean one that didn’t just recopy dialogue from earlier in the novel.

This novel reminded me of what I love most about contemporary YA lit; that each story is a little slice of life which can, and does, offer to the reader a number of small life lessons to be learned, or remembered. Some of the lessons I found in this book are: don’t take things at face value –the glass front of the home is a perfect metaphor for this-, all struggles have hope for recovery, and the people in your life that care about you want to support you, but you have to ask for help because they can’t read your mind.

Also, some of the emotions and thoughts communicated by Dessen in the narrative were echoes of my own thoughts, and seeing them printed out made them less of a wonder and more of a shared experience. Some of the considerations about friendship especially rang true for me, the pain of losing a friend over a miscommunication but not being able to repair the relationship, and the importance of expressing ones feelings - in a friendship or a relationship.

Finally, the title itself announces the hardship of hearing someone you know tell you about bad things that happened to him or her that you cannot fix. However, I think Dessen, in her novel recognizes the importance of the listener validating the speaker, and their upset, and supporting them through the aftermath, be it hours, days, months, or years after the fact.