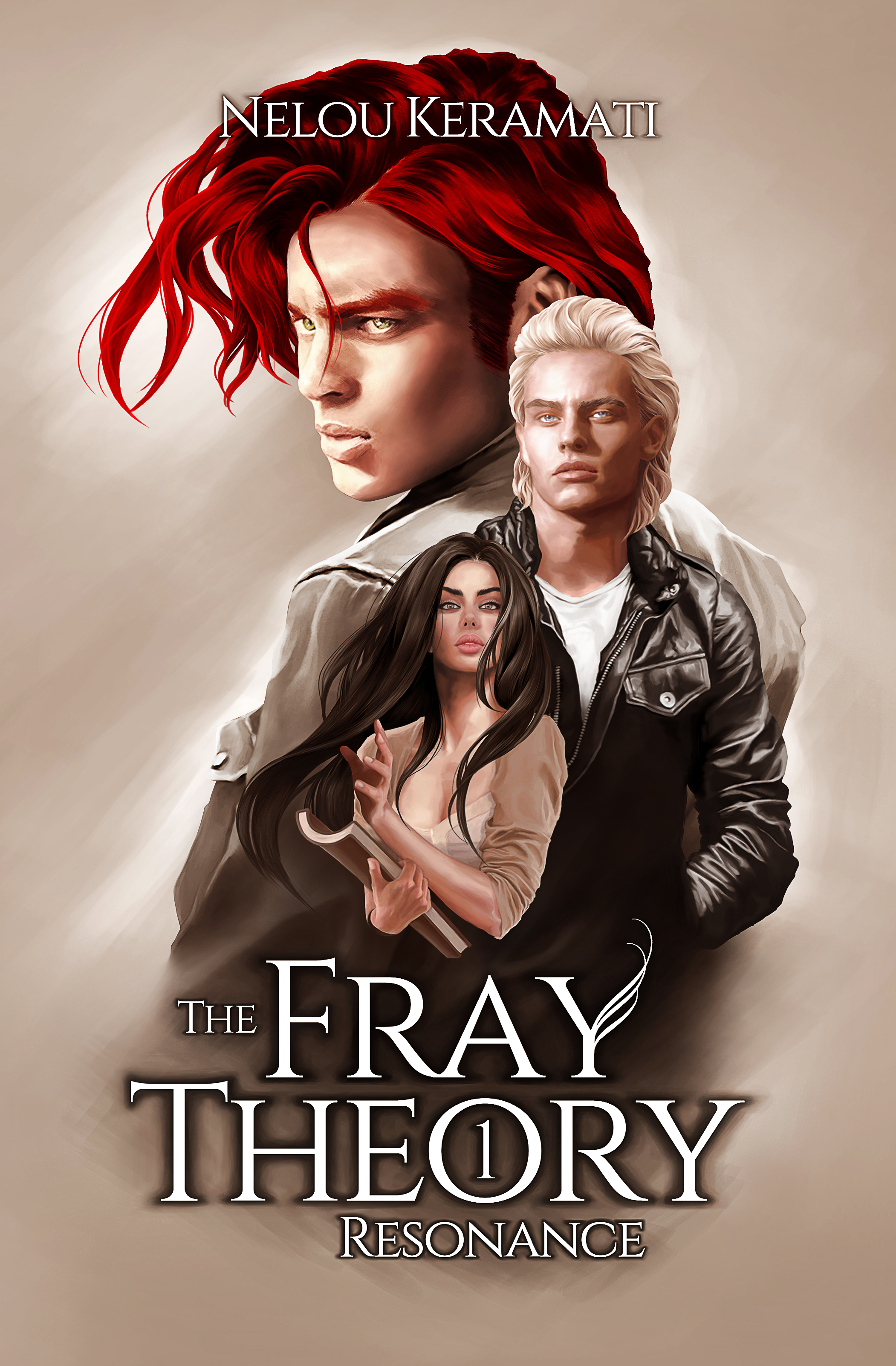 The Fray Theory Resonance by Nelou Keramati
Publisher: Finch Hill
Page count: 332
Release Date: August 31st 2016
Series: The Fray Theory (1/?)
Rating:
Plot Summary: Neve Knightly lives in an ordinary world. Where déjà vu is nothing more than a mind-trick. Where premonitions are dismissed as mere coincidence. Where no one thinks twice about the glitches in their reality. Neve Knightly is living a lie. But when her nightmare of a tragedy comes true the very next day, she can no longer seek solace in self-deception. The glossy enamel has been shattered, and she has caught a glimpse of what slithers just beneath the surface.
Adapted from : GoodReads

What first drew to the fray theory was its cover. It isn’t often these days that you will find painted covers, and the style reminded me of a classic 80s science fiction novel, but with a modern edge. It is beautiful. So I contacted the author to see if she was handing out ARCs. Turns out she was, and on top of that, she’s Canadian. How could I not read and review? When I finished this book, my thoughts were all over the place. What I liked and didn’t like were surprising to me, and I think in order to make this review as clear as I want it to be, I’m going to divide it just like that. The good and the bad.

Let’s start with the good.

The premise behind this book is one of the most original ones I have seen in a long time. Without going into too many details or handing out spoilers, it deals with the idea of Alternate Universes and Realities. The concept is explained at length throughout the novel, and has just the right amount of sci-fi edge without being too hard core. It is clear that Keramati spent a lot of time fleshing out this idea, and she had the background to do it, having studied Cognitive Neuroscience for 2 years at the University of British Columbia, plus another 2 years of psychology on top of that.

Which brings me to the second thing I loved about this novel. IT IS SO CANADIAN.

This is my inner Canadian, just having a grand old time.

I personally feel like the Canadian authored YA pickings are slim enough, but if you’re adding the filter of “this story takes place in Canada”, the list becomes even shorter. It has always seemed so strange to me seeing as we have some really great cities to base stories in. Perhaps authors worry they will alienate a huge potential market. Whatever the reason, I was very pleased to see Vancouver featured in this novel in a very authentic way. It wasn’t just a mention here and there. Everything about the story felt Canadian and, more specifically, West Coast Canadian. I loved it so much that I featured this book on our Instagram for Canada Day!

The bad for this novel wasn’t even necessarily bad so much as bad for me. I am not really used to reading novels that are written in the present tense, so it sort of threw me off a couple times. It made some of the key moments feel clunky and confusing to me. That however is not the fault of the author, but more an issue that I need to sort out on my own (I recently opened up a V.E. Shwabb novel to see the present tense used there too. Clearly I need to figure this out).

The writing in this novel is both one of its finest points but, for the reason above, one of the worst. Because I was struggling with the present tense, I found I had to re-read things to enjoy the really quite beautiful prose that Keramati uses. Her vocabulary is quite expansive. Perhaps even too much so at times, but it really reflects an educated writer who worked very hard on this story. I can appreciate that. Those who have the same reading issues as I might struggle, but I can promise you that it’s worth it.

Finally, I found that there was at once too much and not enough packed into this novel. This is a very common occurrence when it comes to the first book in a series. There is so much to set up that the entire first book ends up being exposition and introduction. The most exciting parts of the action started up about half way through the novel and really kicked into gear for the last quarter. Because I read this as an e-book, I did not know the end was coming until it was there, so I got to the last page and just kind of stared at my tablet in confusion. Ended? Already? But things were just getting really exciting! All I wanted was to see Neve, Romer and Dylan go on adventures now knowing who they were and what they could do. That I have to wait is, frankly, a travesty. insert hair flip here

Characters are the backbone of any story, so I feel the need to talk briefly about Neve, Romer and Dylan.

Neve is a heroine who is… real. I don’t know a better word to describe her than that. She has strengths, but she also has faults and flaws. She is hurting (for many spoilery reasons I won’t list) and has a lot to face.

This is exactly what I look for in a YA heroine. She doesn’t need to be perfect. In fact, the less perfect the better. At the same time, she can’t have a “save me” complex like one miss Swan. Luckily, Neve doesn’t have that. Yes, she leans on those around her when she needs help, but she’s also extremely resourceful.

Dylan. Let’s talk about Dylan for a moment. I feel bad, because I feel like he’s supposed to be the one we root for, but I just didn’t jive with him as I did with Romer. He is a decent guy, and seems to genuinely care about his friends, but I just… I don’t know. He’s too good. Too pure somehow.

Romer on the other hand has edge to him and his instability really made him an interesting character to me. He’s faced so much in the world and has come out stronger for it. He is probably the character who best reacts to everything in the novel. His reactions are at times a little volatile, sure, but he also adapts very quickly. In case you haven’t guessed it yet, yes, Romer is my favourite.

THAT BEING SAID. I love all of their character designs. Seriously. Remember what I said about that cover art? It is beautiful. Dylan’s hair is gorgeous. I’d almost be willing to get on team Dylan for that hair. The best part about the cover though is that it was painted by the author herself! Nothing like getting full creative control over your work.

I would highly recommend this novel to anyone who likes a little sci-fi in their YA as well as to anyone who likes reading Canadian content. There is a real push for this from the literary community here and our big book store Chapters Indigo has even started a #ReadTheNorth campaign to push people to read local(ish). So why not jump on that band wagon with the newest novel by Keramati? August isn’t all that far away, so mark your calendars folks!

What do you think? Will you be picking up this book when it comes out in August? Let me know below!