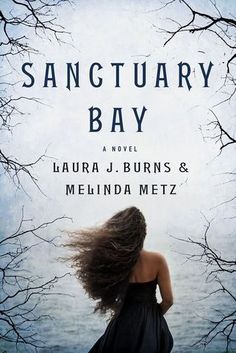 Sanctuary Bay by Laura J. Burns and Melinda Metz
Publisher: St. Martins Griffin
Page count: 314
Release Date: January 2016
Rating:
Plot Summary: When Sarah Merson receives the opportunity of a lifetime to attend the most elite prep school in the country-Sanctuary Bay Academy-it seems almost too good to be true. But, after years of bouncing from foster home to foster home, escaping to its tranquil setting, nestled deep in Swans Island, could not sound more appealing. When her roommate suddenly goes missing, she finds herself in a race against time, not only to find her, but to save herself and discover the dark truth behind Sanctuary Bay's glossy reputation.
Adapted from: GoodReads

What starts out as your average “low-income girl in upper-class world” plot line turns out to be much darker and surprising in a good way! The plot frequently changes directions moving from drama to thriller to mystery to action; a good book for when you can’t settle on one genre and want a bit of everything!

The first chapter of Sanctuary Bay created an intriguing back-story for the main character, Sarah Merson; a traumatic event from her childhood leaves her an orphan. She moves around to different foster homes and schools, never really fitting in or feeling comfortable, as a result she is distrustful and cautious of everyone, an ideal character trait in someone piecing together a mystery! 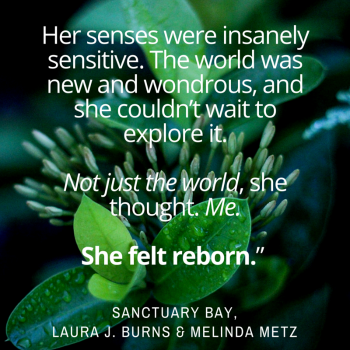 The first third of the book feels like a regular contemporary novel, with a new girl starting at a special, elite boarding school, hoping to find a place to finally call home. But making friends is easier than Sarah expected, everyone is super friendly, even a bit Stepford-y, making the reader guess there might be more going on. But Sarah is so enthralled by it all that the reader goes along with it too. SPOILER: Sarah’s initiation into the Wolfpack is a clear turning point in the plot, from then on things get darker and darker, and suddenly the reader begins to ask questions such as: what is Blutgrog actually, what’s really going on at Sanctuary Bay, and who can be trusted? The plot moves from light to heavy rapidly and by means of a succession of intense sequences of events that is simultaneously smooth and choppy, almost like Burns and Metz are guiding the readers down stairs with cycles of sudden drops and short plateaus.

Although this book is not currently part of a series, it ends with such a cliffhanger and so many questions that I feel quite confident that the authors will write a follow-up novel in the near future!

I loved that this book surprised me! The tone and mood changed many times, the plot shifted genres from a high school drama to a thriller-mystery. These shifts helped the story feel more complex; the first part was background, the second was the intrigue, and the third was all about finding answers. Sanctuary Bay is well planned and fittingly paced.

Giving Sarah superior memory abilities, a photographic memory and hyperthymesia, made for some very vivid descriptions throughout the novel, especially regarding the sensations resulting from the consumption of Blutgrog. Furthermore, her overactive imagination (linked perhaps to her ability to recall instances of intense emotion) made the creepy moments around the middle of the novel so much creepier in a great way!

Some of the plot points were quite transparent: SPOILER: that the Blutgrog was a drug was obvious, as was the motivation of Fortitude, mind-control over the most powerful individuals in the country, but there were also neat surprises, SPOILER: like how Sarah was confused between reality and dreams for a while, Dr. Diaz’s role, and how Sarah unwittingly discovered how suggestible those under the influence of bromcyan are. Also, every time a problem seemed solved, there was another roadblock, to the point that there was basically non-stop action at the end, super engrossing!

I did not appreciate the ending for a couple reasons. First, readers clue in from the start that Merson is not Sarah’s real last name, however her real name is only revealed at the very end, and actually provides no clarify to the reader regarding why it was changed. With everything coming to an end so quickly, the end of the novel is chaotic and a bit disorienting. In fact, the end brings up more questions than answers, especially about Sarah, SPOILER: who is her father, what did he do, how will she find him? Burns and Metz left the novel in a total cliffhanger; it’s almost as though they brainstormed the sequel and tried to put as much bait for book two into the last pages of book 1 as possible – a cheap trick that I hate as a reader.

After reading Sanctuary Bay, I was curious about Sarah’s two memory conditions: eidetic memory and hyperthymesia.

I’d heard of an eidetic memory, or a photographic memory, the ability to recall whatever one sees – what an amazing ability! Apparently only about 1% of people have this gift. Want to know if you’ve got a photographic memory? I found an online test through the Open University that you can take, it requires about 8 minutes of your time, check it out here!

Hyperthymesia, or highly superior autobiographical memory (HSAM), is equally real, and maybe a bit rarer for being more recently brought to light. Essentially is allows a person to recall everything about their past in a very vivid way, making the past feel like the present, which I think Burns and Metz capture well in their novel!