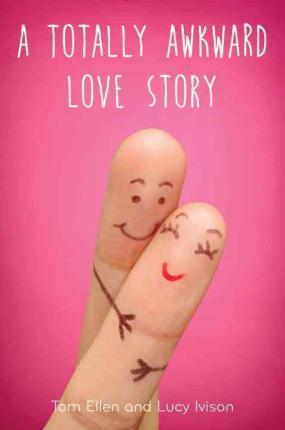 A Totally Awkward Love Story by Tom Ellen and Lucy Ivison
Publisher: Delacorte
Page count: 305
Release Date: 2016
Rating:
Plot Summary: Sam and Hannah only have the holidays to find 'The One'. Their lobster. But instead of being epic, their summer is looking awkward. They must navigate social misunderstandings, the plotting of well-meaning friends, and their own fears of being virgins forever, to find happiness. But fate is at work to bring them together. And in the end, it all boils down to love.
Adapted from: GoodReads

A Totally Awkward Love Story, answers the dating world’s ever-present question: I wonder what he/she is thinking right now… The dual narrative presenting both Sam and Hannah’s side of the story provides readers with a vantage point that is both sweet and frustrating, but above all very sincere. As you read this book, you will be transported back to your own first dates, the excitement, the insecurities and the unforgettable memories!

Two people writing a book together is awesome, teamwork for the win! Plus, having each person take on the narrative voice of one of the two main characters was great; the frequent chance of perspective was fun! The other advantage of a dual-narrative is that readers get the chance to see why things are said and done as well as also how they are received. (A total dream-come-true for the person who would want mind reading as their super power!) 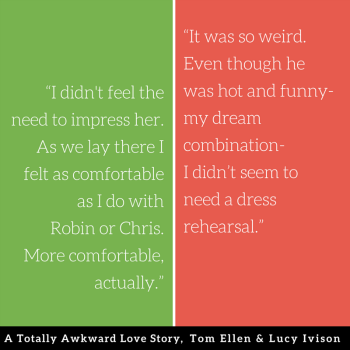 Although Sam and Hannah are just finishing high school, they have moments of extreme clarity and impressive self-awareness of what it means to be a teenager. For example, when Sam comments on loosing his virginity and how he feels that he’s not even doing it for himself, but rather to be able to tell the story of how it happened to his peers, or when Hannah talks about the awkward transition from youth to young adult, reminiscing about the days when they “didn’t have to pretend to be adults all the time.” (p.40) – These passages are reminders that the authors are reflecting back to their teenage years, insightful to the max, since, as they say, hindsight is 20/20!

On the other hand, A Totally Awkward Love Story also explores a large number of very sincere teen thoughts about frenemies, insecurities, school-related stress, summer adventures (and let-downs!), and the complicated themes of first love and the mystery of sex. Speaking of sex, it was a pretty big plot point in the book, and I think it was aptly weaved into the story, with little episodes leading to the finale, SPOILER: Sam and Hannah’s first time having sex, narrated in oscillation between the two, was equally comical and endearing.

There are a couple things I really liked about A Totally Awkward Love Story, the dual-narrative was a highlight, though I will admit I preferred Sam’s narration simply because of how funny he was; his rant about vests, contemplation of Sam vs. Samuel, and his inability to tell his co-workers apart are just a few of his many hilarious moments.

Another thing I liked was the ending. I felt that it wrapped up the major plot, SPOILER: and while it was very much about Sam and Hannah finally being together, the reader, having read so much about their tumultuous relationship journey cannot help but appreciate the nods to the couple’s earliest bonding moment, referencing hot grape juice and high tens!

My main annoyance with this book was the absurd amount of insecurity expressed by Hannah. I know insecurity is a common and very real problem, I myself struggle with it daily, but based on the things that happen to Hannah SPOILER: her being told she is beautiful, boys being attracted to her, the good friends she has in Tilly and Grace (and at times Stella), I can only assume she is willfully blind to her own attractiveness and good luck. She always seems to assume the worst and then pities herself for it. Again, I know this happens to us all sometimes, but with Hannah it felt like it happens all the time; I kept waiting for her to wake up and realize she was wasting her life feeling sorry for herself!

Communication is key!! This is something that I have always believed in, but after reading A Totally Awkward Love Story I couldn’t help but think that Sam and Hannah could have been happy together a lot sooner had they just communicated instead of jumping to conclusions: SPOILER: “Hey Hannah, do you like Pax?” or, “Hey Sam, want to go see a movie sometime?” – bam, half the problems in the book would have been solved!

I know being honest is scary and feels very risky, but isn’t it better to know than to guess, and in this case, and many real cases, guess wrong, resulting in disastrous misunderstandings? Take a chance and say what you feel! Worst-case scenario, they don’t feel the same way, now you know and can move on; best-case scenario, they feel the same way, awesome, let the good times roll!