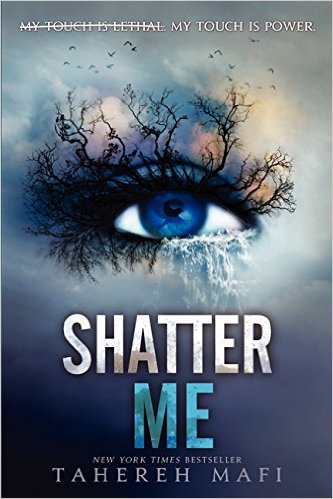 Shatter Me by Tahereh Mafi
Publisher: HarperCollins
Page count: 338
Release Date: 2011
Series: Shatter Me (Book 1/3)
Rating:
Plot Summary: Juliette hasn’t touched anyone in exactly 264 days. The last time she did, it was an accident, but The Reestablishment locked her up for murder. No one knows why Juliette’s touch is fatal. The world is too busy crumbling to pieces to pay attention to a 17-year-old girl. Diseases are destroying the population, food is hard to find, birds don’t fly anymore, and the clouds are the wrong color. The Reestablishment said their way was the only way to fix things, so they threw Juliette in a cell. But maybe Juliette is more than a tortured soul stuffed into a poisonous body. Maybe she’s exactly what they need right now. Juliette has to make a choice : be a weapon. Or be a warrior.
Adapted from: GoodReads

Shatter Me is everything I wanted from a YA dystopian fiction novel – with a strong, jaded but open to growing heroine, a good back story, and good pacing; from beginning to end Tahereh Mafi delivers an engaging read! Also, it’s beautifully written; you really can’t go wrong with this one!

So, on the surface this book seems like your average YA dystopian lit – ostracized girl meets rebel boy who leads her to the greater purpose that is the resistance to the evil controlling government power. And, while this IS the general plot line, Mafi enhances the stencil. First she begins the story far enough back to give a proper backstory, we actually feel the horrible situation Juliette is in – tortured and punished for a power she cannot control. SPOILER: The capture of Juliette by Warren was unexpected but good, I was thinking she and Adam would run away together and join the resistance – which they eventually do, but the detour involving Warren adds an extra element to the story. 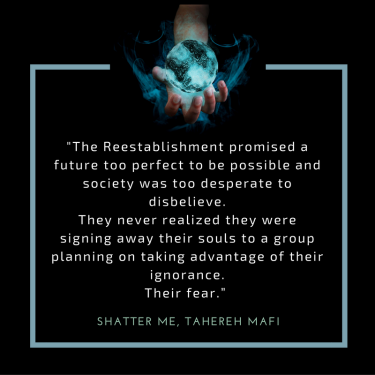 Mafi also develops some pretty captivating characters, both Adam and Juliette are clearly wounded souls who have experienced some horrible things, but stay strong, if withdrawn, through it all. They are similar in a lot of ways, but they complete each other really nicely – two stubborn characters with soft sides. Warren is a pretty awful character, but I wonder what happened to him to make him so ruthless – for him to be in so much of the book, he must come back in subsequent books, I’m interested in hearing his story!

The writing was also pretty outstanding in a number of ways. First, Mafi has given a very poetic narrative voice to Juliette, some of the wording is just beautiful, case in point: “The moon is a loyal companion. It never leaves. It’s always there, watching, steadfast, knowing us in our light and dark moments, changing forever just as we do.” (p.27-28) Mafi’s use of crossed-out text and repetition speak volumes to Juliette’s fragile state at the beginning of the novel and gradual progression into a confident young woman sure of her own thoughts and honest enough with herself to express them.

The love triangle is a bit obvious, SPOILER: Warren and Adam both having feelings for Juliette, but I like that Juliette responds to them both in different ways, there is some attraction between her and Warren which is interesting. Also, since they are both immune, I wonder if maybe loving her makes them immure, like love overcomes the pain? And, sad as it is, her parents never loved her enough to become immune?

Furthermore, I have to ask, SPOILER: if avoiding her touch is as simple as her wearing gloves, why didn’t she just do that as soon as she found out about her power – seems like a pretty obvious solution to me and would have avoided the unfortunate incident that got her removed from her family in the first place.

With regard to the “superhero” element of this novel, I love that not all the powers are useful, more realistic than everyone being able to fly or read minds. I was however decidedly NOT a fan of the one mention of the word “superhero”, it felt cheesy and beneath Mafi. And finally, I think that the description of Juliette in her special costume comes off as a bit objectifying and uncomfortable. It doesn’t really fit the tone of the book up to that point.

Before picking up this book I was beginning to feel a bit of despair, every dystopian YA book I have picked up lately has felt like the same story repeated with different character names. Mafi’s Shatter Me was a good reminder that there are still dystopian YA novels out there that are breaking the mold, or at least pushing the envelope enough to keep things interesting! ;)

Have you read any good dystopian YA lit lately? With my faith restored I’m looking for recommendations, leave ‘em in the comments below!