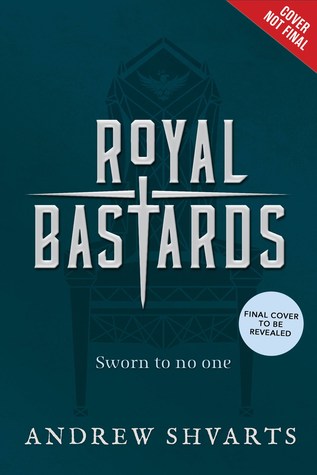 Royal Bastards by Andrew Shvarts
Publisher: Hyperion (Disney Book Group)
Page count: 354
Release Date: June 2017
Series: Yes (Book 1/3)
Rating:
Plot Summary: Being a bastard blows. Tilla would know. Her father, Lord Kent loved her as a child, but cast her aside as soon as he had trueborn children. At sixteen, Tilla spends her days exploring tunnels beneath the castle with her half brother, Jax, and her nights drinking with the servants. Then, after a feast honoring the visiting princess Lyriana, Tilla leads the sheltered princess on a late-night escapade. Along with Jax, Miles, and Zell, they stumble upon a crime. With Rebellion brewing in the west, the group, wanted for what they witnessed, flees for their lives, pursued by murderous mercenaries. The bastards band together, realizing they alone have the power to prevent a civil war that will tear their kingdom apart.
Adapted from: GoodReads

Full of sequences of surprising moments based in a well-crafted plot, Royal Bastards is a must-read for fans of action/light fantasy YA novels who are looking to be impressed. With a solid group of protagonists, a well-developed storyline, and some interesting moral dilemmas, this book was hella hard to put down!

Note: This review is based on an uncorrected proof of the novel Royal Bastards by Andrew Shvarts.

From the very start, Royal Bastards throws a curveball to the readers and makes a splash in the fictional world of Noveris when Princess Lyriana opts to sit at the bastards’ table rather than the place of honour at the front of the banquet hall. And it only gets more surprising from there – on the run from the law, an unlikely group of adolescents form a Breakfast Club-esque bond as they are tested again and again, getting to know each other better and learning about themselves too. 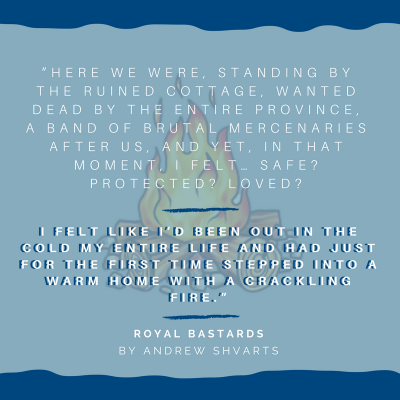 Tillandra, Tilla, of the House of Kent is the main character, though I would argue that Jax, Lyriana, Miles and Zell are just barely less important than her in this novel. I liked how sincere her narrative voice was – she thought at one point how strange it was that she was having to explain basic history to a Zitochi when she could barely remember anything about it herself and tells just about half the history. This feels more true-to-life than those characters who magically remember everything historically relevant to their story. I also thought her dreams of being legitimized were very poignant, all the more so when SPOILER: her father revealed to her his hope that she would join him as his legitimate heir – as a reader I was so conflicted!!! Fostering such strong emotions in a reader is truly the sign of a great book!

I loved the pacing of the story, it was action-packed, but not a whirlwind that made my head spin. The novel was easy to read and had a good balance of dialogue and description; I didn’t find myself ever impatiently skipping blocks of details to get to dialogue only to feel guilty send myself back to read what I missed – admit it, you’ve done that too!

My favourite part about Royal Bastards though was the character development among the group of protagonists! Everyone got their time to shine, in, what felt like, a very organic way; Tilla was the clear lead, but Lyriana, Jax, Miles and Zell were all crucial to the story in their own ways. Additionally, while the end-game connections between the characters was pretty obvious from the start the journey they all took to get there was an interesting one to see develop. Lyriana especially had a fascinating development throughout the novel.

I like the elements of fantasy that were present in the way magic was incorporated as well as the conceptualization of some creatures in the book. But most of all I liked how rooted the whole story still felt in terms of similarities to real life. Sometimes fantasy feels to far removed to be at all believable, but Royal Bastards is a convincing read, mostly.

While I really liked the book overall, my qualms with it both have to do with the more intimate, either romantic or heavy friendship moments. Two instances in particular come to mind where the plot feels unnaturally forced and very different from the flow of the rest of the book. SPOILERS: When the group plays drinking truths (though I do really like how Lyriana is in the scene!) and when Tilla and Zell get together, the tone of the novel feels different somehow, less organic than the rest of the book and that left me with an odd feeling…

In Royal Bastards, Shvarts presents some interesting ideas on the concept of a bastard child. Between Tilla, a nobel bastard who is merely a “surplus” child, Miles, a nobel child bring groomed for legitimization, and Jax, a bastard born of a commoner, destined for the stables, we see three depictions of possible lives of bastards and how diverse these futures are. However, I think Zell and the Zitochi definition of bastard is the most interesting, as the title bastard is not given to illegitimate offspring, but rather to legitimate offspring who disgrace their families. Since a bastard is seen as something shameful, it seems rather unfair to label a child as such at their birth… it just doesn’t seem fair to punish a child for the “crimes” (I use that term very loosely) of the parents. At least in the Zitochi conceptualization the punishment is given to the person who committed the transgression, so to speak. So there are my thoughts on ownership of fault. Do you see things differently?? Post your perspective in the comments below.