The One Memory of Flora Banks by Emily Barr
Publisher: Philomel
Page count: 290
Release Date: May 02, 2017
Rating:
Plot Summary: Seventeen-year-old Flora Banks has no short-term memory. Her mind resets itself several times a day, and has since the age of ten, when the tumor that was removed from Flora's brain took with it her ability to make new memories. Then she kisses Drake, the night before he leaves town. This one memory sticks. Flora is convinced that Drake is responsible for restoring her memory. With little more than the words "be brave" inked into her skin, and written reminders of who she is and why her memory is so limited, Flora sets off on an impossible journey to Svalbard, Norway, determined to find Drake. But from the moment she arrives in the arctic, nothing is quite as it seems, and Flora must "be brave" if she is ever to learn the truth about herself, and to make it safely home.
Adapted from: GoodReads

This book reminded me of what I loved best about first person narration – that it allows you a glance into the mind and the reality of someone else. And Flora Banks is such an interesting individual that her narrative point of view is just fascinating! The story itself is also a beautiful, at times funny and at times sad, portrayal of a journey of self-discovery; full of twists, turns, and upheavals. Would recommend this book to everyone!

Note: This review is based on the uncorrected text of The One Memory of Flora Banks by Emily Barr.

When I initially got this book in my hands I was worried it would be a teenage version of 50 First Dates – which is a good movie, but not a great one. Well, from the first few pages I knew I was wrong in the best way possible. This story, though it hinges on a romantic interest as a major plot point is a stunning coming of age adventure! I use the word adventure very intentionally; the travel element of this novel is very well portrayed, from exploring a new place to meeting interesting people the travel experience is so genuine. 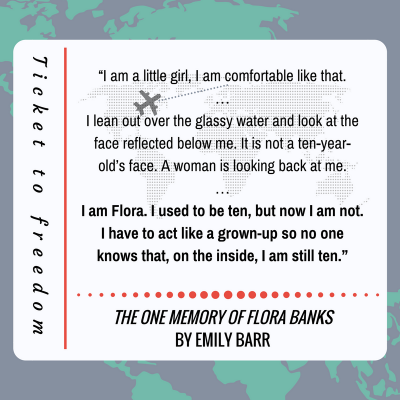 Flora is a gem of a character, she has the mind of a ten-year-old in the body of a 17-year-old, and everyone in her town knows she has no memory – she is coddled by her parents and considered endearing by the citizens of Penzance. But Flora is no passive child, she actively fights to remember things, she writes herself notes on her hand and arms and later copies them down into a notebook to help herself remember the things she knows she will forget. She has such a curious, active mind – like a child, but also grasping for something beyond that.

Emily Barr captures Flora’s amnesia through the narration so well, looping back on the same ideas, showing us the frustration and fear Flora feels when her memory “resets”. Often in these moments Flora reverts to her child-like self and wants to see her parents, though she keeps those thoughts inside, and only we the reader are privy to them – on the outside her rule is always to stay calm, act normal, and seem as adult-like as possible.

The book itself is divided into 3 part all relative to her journey to Norway – that is to say before, during and after. More than that though, the parts show us different sides of Flora – SPOILER: medicated and oblivious, undedicated, and medicated but assisted in regaining her independence.

The One Memory of Flora Banks is truly a stunning read. It combines a lot of great elements of YA literature to make an A+ book: a truly unique character, an adventure, a coming-of-age story (in a really neat and sort of literal way!), a story about connections between people: family, siblings, friends – both old and new, and believing you are capable of more than someone else tells you that you are.

The special bond between Flora and her brother Jacob was really sweet. He looked out for her the best he could and encouraged her to be herself. His approach was always to wait for her to come to him which I think would be important for Flora – her initiative is necessary to her learning information. SPOILERS: Jacob’s final letter to Flora destroyed me. I was devastated that he died but so glad that Jacques and Paige would help her free herself from her parents loving but ridiculously overprotective clutches. I reeled at the truths Jacob delivered and also subconsciously realized that made a lot more sense than the story her notebook told. Jacob, though an unseen character, was a total MVP for me in this story as well!

I was hooked at the start by the writing style and narrative voice, then I become immersed in the story and the end scandalized me with some of the final revelations! This book had me fully enchanted throughout the entire reading experience. Thank you Emily Barr for writing such a perfectly wonderful book!

My final thoughts on this book simply these: Flora is an incredibly brave character, she overcomes fear, panic, complete disorientation, among other things, and travels around the world! Imagine being in an unfamiliar place, not knowing how you got there and reading in a notebook in your handwriting what you are supposed to be doing. Her life is like a spy mission and the stakes are her sanity. This book is intense and endearing and I want to let it speak for itself.

Short extract from The One Memory of Flora Banks:

*“I am doing the bravest thing of my life. I have been reading my notes without stopping, so I feel as if, right now, I know what I am doing. I am sitting on a plane, on my way to Svalbard, to fin Drake.

I have made it to this point (almost to the town of Longyearbyen, almost to Drake). I have done it. I have no idea how I got to the airport in London, but suddenly I was standing there, surrounded by people.

I stood and stared around, and the panic built inside me until I started to cry, but they still all ignored me. I wanted my mom and dad, but they weren’t there. I had to go to a woman who had the word INFORMATION on a sign above her head…