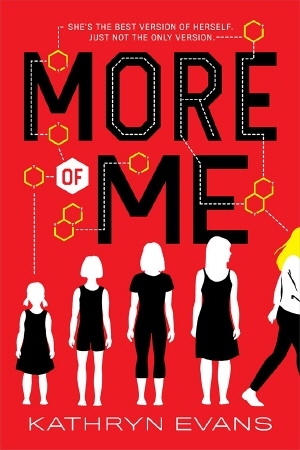 More of Me by Kathryn Evans
Publisher: Amluet, an imprint of ABRAMS
Page count: 320
Release Date: June 13, 2017
Rating:
Plot Summary: Teva goes to school, studies for her exams, and spends time with her friends. To the rest of the world, she’s a normal teenager. But when she goes home, she’s anything but normal. Teva unwillingly clones herself every year. And lately, life at home and at school, has become a battleground, Teva has a fight on her hands—a fight with herself. As her birthday rolls around, Teva is all too aware that time is running out. She knows that the next clone will soon seize everything she holds dear. Desperate to hang on to her life, Teva decides to find out more about her past . . . and uncovers lies that could either destroy her or set her free.
Adapted from: GoodReads

A creative story idea that mixes light sci-fi with a contemporary YA setting; if you’ve ever wondered what your past self was like, or what life would be like if you could clone yourself, this novel will entertain and perplex you!

Note: Note: This review is based on an advanced copy text of More of Me by Kathryn Evans. 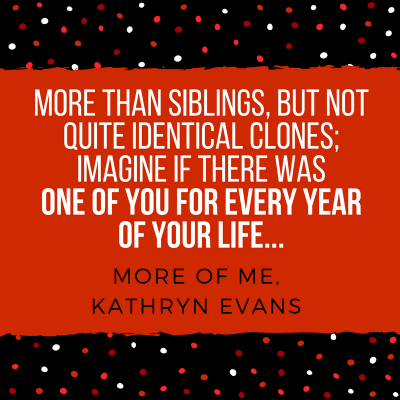 In this novel, Kathryn Evans introduces an explores the idea of birthday cloning; every year on her birthday a new Teva emerges from the old Teva, a little bit older looking, and with a slightly different personality. This new Teva takes over the like of Teva and the old Teva is put on house arrest, never aging, never changing, bored and unsatisfied at having had to give over the life she spent the last year building. Isn’t it intriguing? No one knows about Teva’s condition, not her best friend, not her teachers, just her super protective mother who is convinced telling anyone will result in her daughters being taken from her and experimented on.

This novel presents some neat ideas about the concept of growing up and how an individual changes from year to year. There is also a psychological element as Teva begins to question the impossibility of her situation and the probability of her own insanity.

More of Me is well-written, and overall a quick read. There were occasional bit of British flair – nothing big, but a word here of there, or a turn of phrase that just sounded not-North American, which was fun!

Teva is such a brave character, she decides she wants answers, wants to end the cycle of fear and the unfairness Teva’s face of living for one year and then being locked up. SPOILER: I appreciate her desire to want to improve the situation, not just for herself, but for her past selves too. She is quite mature of be handling such a dramatic identity crisis alongside all the regular teenage issues; friends, college applications, boyfriend, etc.

The decision to invent Celly and to reach out online about her condition was brilliant. It felt very natural and logical and was well orchestrated. Can’t believe her number one commenter SPOILER: turned out to be her father – what a twist, I was sure it was Tom!

Heads up, there is a bit of a graphic scene towards the end of the book involving self-mutilation which was quite vividly described – intense but understandable given the context.

The ending is pretty perfect; SPOILER: it’s a break from the usual cycle without completely solving the issue in one go, there will still be challenges ahead, but something has changed. Something about new Teva is more common to the usual birthday experience, character traits from the old Teva staying with the new Teva. It gives the reader hope that Teva will eventually stabilize naturally or learn to control her cloning tendency.

I found More of Me to be a poignant meditation on aging and how we grow from year to year; a good metaphor for the importance of letting go and moving on, least we be haunted by our past selves all our life.

The story was captivating and the characters were convincing from Teva to her friends Tom and Maddy, even Frankie their teacher was a fun character! The book had light moments well balanced out by more intense moments, dramatic or trilling. All in all this was a highly stimulating read!

So, how would you feel if lived in a house with an identical clone for every year of your life?