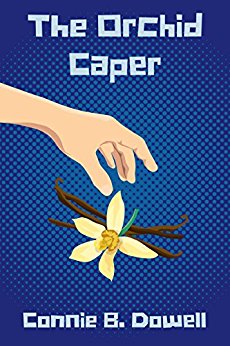 The Orchid Caper by Connie B. Dowell
Publisher: Book Echoes Media
Page count: 189
Release Date: May 11, 2017
Series: Yes (Ian and Darleen Book 1)
Rating:
Plot Summary: A down-on-her luck burglar, a trust fund college kid with something to prove. Will they outfox a master thief? All eighteen-year-old Darlene wants is to rob the joint. College guy Ian comes home too soon. And some ill-timed flatulence brings them together. Darlene thinks she’s toast. Instead Ian gives her a job offer, leading a heist team to steal a rare species of vanilla orchid. Only catch, she’s swiping from one of the best thieves in the biz. With her dad’s store on its last legs, Darlene needs the cash she’ll get when the job is done. Ian's in it to win a bet. Can their rag-tag team pinch the flower right under their mark’s nose? And can they remember not to eat beans for breakfast?
Adapted from: GoodReads

A goofy, light-hearted read that demands you to suspend your disbelief and enjoy the funny, folly-filled adventure of Darlene and Ian, as their crude and high-brow ways, respectfully, collide in an amusing way. This read is like caving to that craving for poutine, a good idea in the moment, but you don’t really gain anything valuable from it in the long run.

Note: This review is based on an advanced text of The Orchid Caper by Connie B. Dowell.

It’s a build-a-crack-theft-team, cue training montage, odds-are-against-us-but-we-can-outsmart-them, oh-no-we-can’t-good-thing-we-are-lucky kind of novel. Ian is a new-money thief, Darlene comes by her skills honestly, together with a rag-tag crew these two amusing characters are both out to prove something to the world. 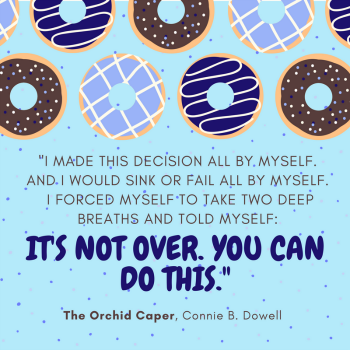 Darlene is skilled and kind, but lives in the shadow of her cousin, Annabell. Ian is cocky and thinks himself pretty clever. They work together and learn from each other, and find out that people are more than their first impressions. With a common goal and a little guidance from a good coach people with raw skill can be transformed into a somewhat competent team.

There are a lot of good elements combined in this book, humour, a good attempt at character development (though a bit two-dimensional), and a few hard and fast life lessons scattered throughout the novel.

The story is fun, easy to read – sometimes a little too simple – but generally moves at a good pace. It’s a relatively short book and a very quick read. A great afternoon beach book, could easily be read in one go.

The characters are amusing, they have strong character traits and equally strong opposite traits. I love that this book challenges some stereotypes like security guards can be passionate about dance. However I think it often goes a bit too hard in portraying two opposite ideas and nothing more when in reality it’s rare for such clear opposition to exist, people are more multi-faceted than that.

The plot is well paced, nicely developed, but really super unbelievable! The redeeming link to reality being that both Ian and Darlene come to learn new things about themselves through the experience of working together – Ian learns he can ask for help, and Darlene learns to trust her abilities and that failure is just a chance to try another way. In fact, the life lessons that crop up all throughout the book were one of my favourite features of this read!

Humor plays a big role in the novel which I liked, but I have to warn you the fart jokes got old fast for me… :/

The Orchid Caper is the perfect book for you if you are seeking a funny, removed from reality, quick read! It’s simplistic, sometimes crude, and I must admit, lacking in substance.

This is a hard one to rate because although I can tell the story is meant to be a fun bit of entertainment and nothing serious, I think when I read the book I was looking for something more, and was a bit disappointed that this book didn’t deliver that.

Have you ever had a similar experience, reading a good book but being in the wrong frame of mind to really appreciate it?! Let me know in the comments!!